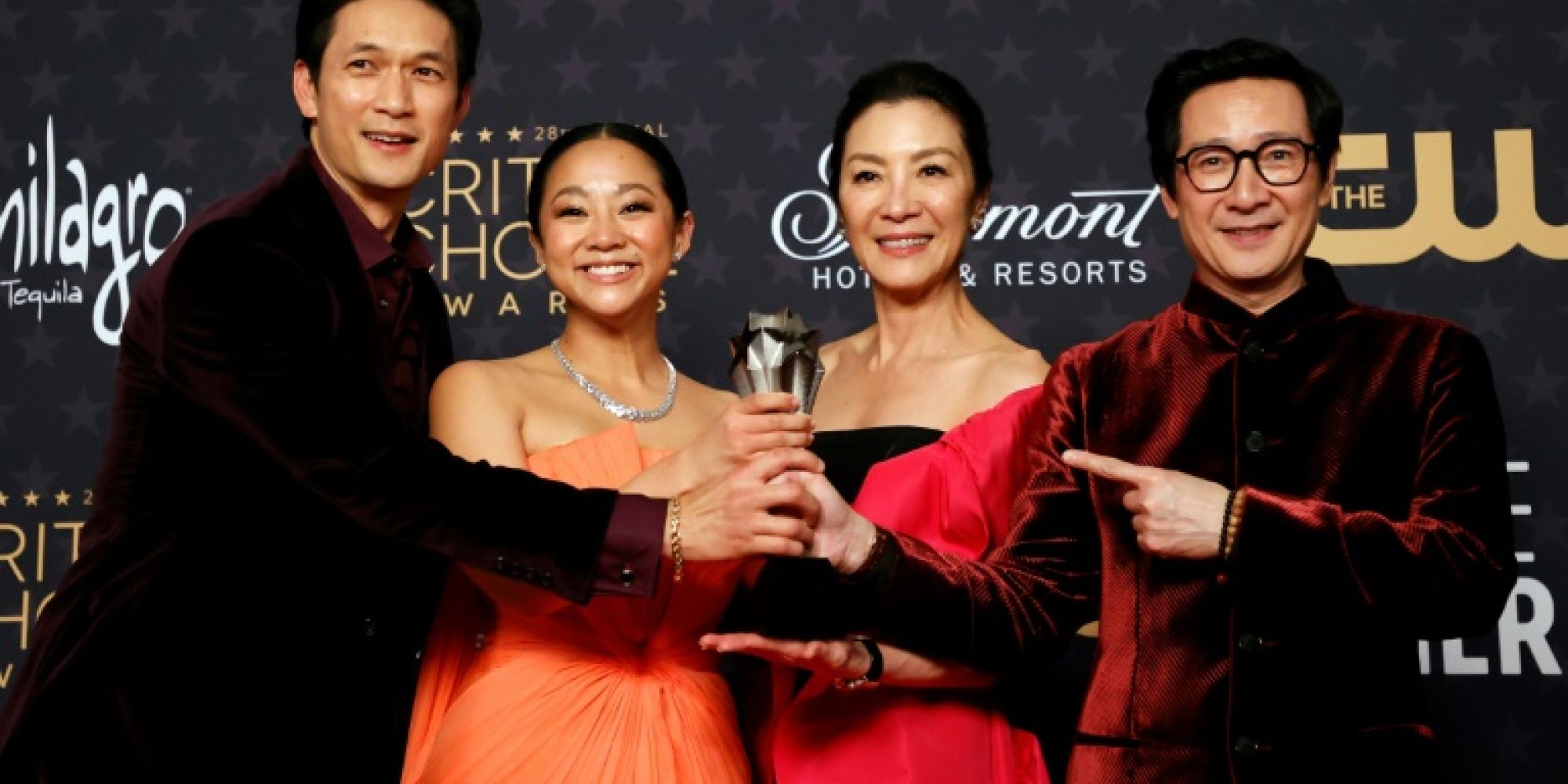 'Everything Everywhere All at Once' tops Oscar noms with 11

Surreal sci-fi flick 'Everything Everywhere All At Once' topped the Oscar nominations Tuesday with 11, as Hollywood formally kicked off the race to the all-important Academy Awards.

German anti-war movie 'All Quiet on the Western Front' and Irish black comedy 'The Banshees of Inisherin' followed with nine nominations each from the Academy of Motion Picture Arts and Sciences, which will hand out the awards on March 12.

As expected, Academy voters also rewarded blockbusters such as Tom Cruise's 'Top Gun: Maverick' and 'Avatar: The Way of Water' for helping to bring audiences back to movie theaters after the pandemic.

Both were nominated for best picture, Tinseltown's most coveted prize, although another crowd-pleaser -- 'Black Panther: Wakanda Forever' -- missed out.

Absurdist indie film 'Everything Everywhere All At Once' portrays a Chinese-American immigrant family undergoing a tax audit, who are quickly drawn into an inter-dimensional battle to save the multiverse from a powerful villain.

It became a huge word-of-mouth hit and has grossed more than $100 million worldwide.

The film earned four acting nominations for its cast, including best supporting actor for Ke Huy Quan -- who appeared as a child in 'Indiana Jones and The Temple of Doom' almost four decades ago -- and best lead actress for Michelle Yeoh.

Her co-star Stephanie Hsu was also nominated for supporting actress, along with Hong Chau of 'The Whale,' in a banner year for Asian representation.

'I think this is beyond just me,' Yeoh told The Hollywood Reporter after the nominations were announced.

'It represents so many who have hoped to be seen in this way, to have a seat at the table, to say, 'I am of value too, I need to be seen too.''

'My phone is going completely bananas from Hong Kong and Asia and China,' Yeoh added.

But there was controversy elsewhere in the lead actress category, as no Black women were nominated, despite Viola Davis ('The Woman King') and Danielle Deadwyler ('Till') having been seen as frontrunners.

Instead the remaining slots went to Ana de Armas ('Blonde'), Michelle Williams ('The Fabelmans') and Andrea Riseborough for tiny indie film 'To Leslie,' which benefited from an unusual, 11th-hour campaign mounted by celebrity friends of the British actress.

All five men in the running for best actor are first-time nominees, with Brendan Fraser ('The Whale'), Colin Farrell ('The Banshees of Inisherin') and Austin Butler ('Elvis') considered joint favorites.

The remaining slots went to Paul Mescal in 'Aftersun' and Bill Nighy in 'Living.'

In the best supporting actress category, Angela Bassett became the first star in a Marvel superhero movie to ever earn an Oscar acting nomination with 'Black Panther: Wakanda Forever.'

Spielberg made the best director shortlist, but no women were nominated in the category, sparking quick social media backlash.

Speaking before the nominations, Variety senior awards editor Clayton Davis told AFP this was one of the more unpredictable Oscars races, in part due to the recent massive growth in the number of international Academy voters.

Those members have been credited with surprises such as South Korea's 'Parasite' winning best picture in 2020.

This year, they got behind Netflix's 'All Quiet on the Western Front,' a World War I drama based on a German novel of the same name.

An early Hollywood film adaptation of the same book won best picture at the third Academy Awards in 1930.

Television ratings for award shows including the Oscars have trended downwards, as Academy voters in recent years have veered toward honoring lesser-known indie hits like 'Nomadland' and 'CODA.'

Many in the industry were hoping for a healthy spread of nominations among 2022's crowd-pleasing sequels, which were sorely needed as giants such as Cineworld, the world's second biggest cinema chain, filed for bankruptcy protection.

As it turned out, James Cameron's sci-fi epic 'Avatar: The Way of Water' -- which sailed past the $2 billion mark globally last weekend -- earned four nominations.

'Top Gun: Maverick,' Cruise's long-awaited sequel to his huge 1986 hit which came out in May during highly uncertain times for movie theaters and earned around $1.5 billion, received six.

'That's the one that feels like it could actually win best picture,' said Davis, before the announcement.

'What better story the day after the Oscars air, than that the movie that saved movies was named the best movie? That's a good story to tell.'