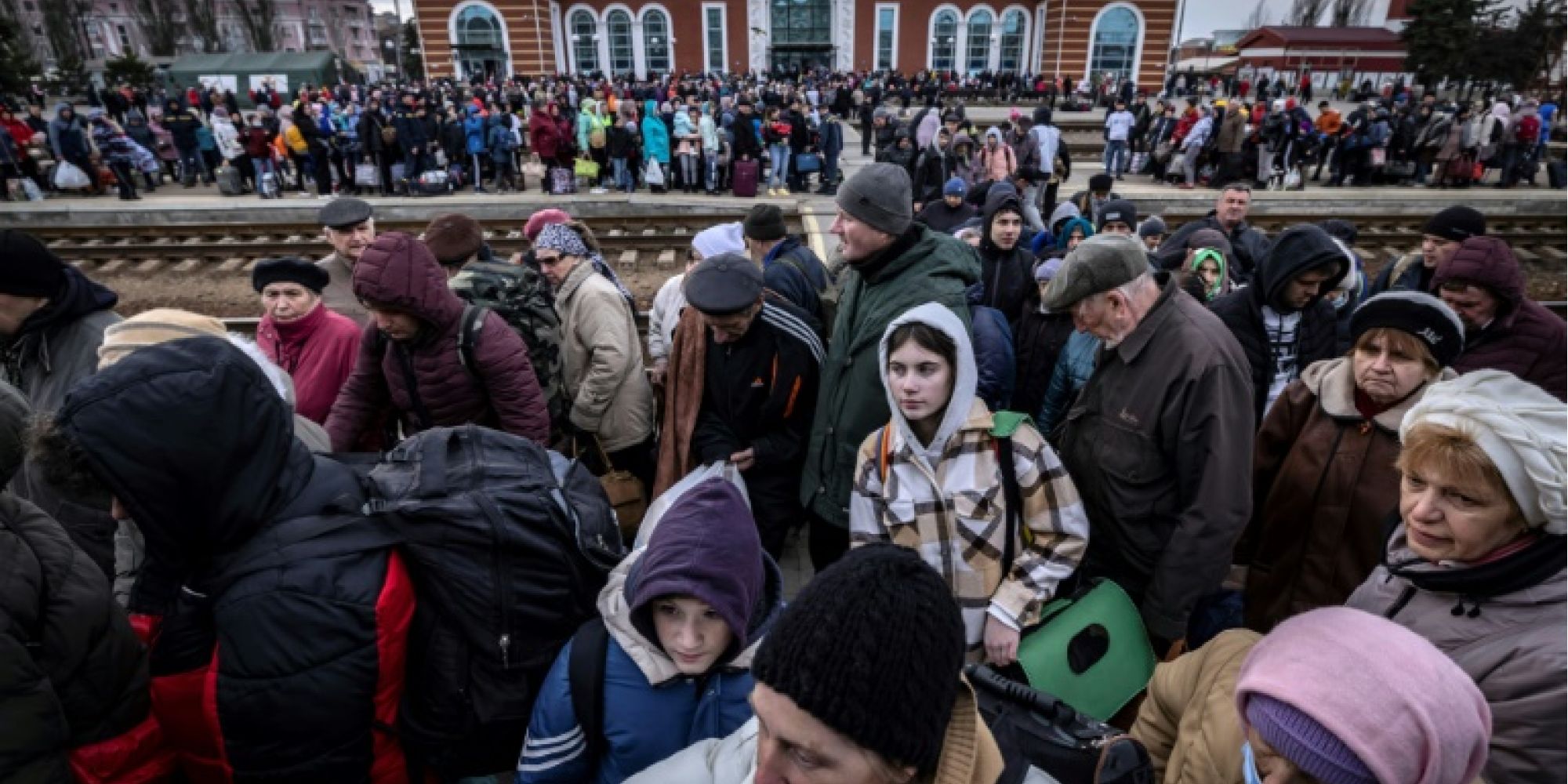 A rocket strike on Kramatorsk's railway station in April last year, which killed dozens, is rarely spoken about in the city near the frontlines in eastern Ukraine.

Despite widespread silence over the brutal attack -- one of the deadliest of the war -- it has left an indelible mark on survivors and witnesses.

Nearly one year on, there are few signs at the small, red brick building of the events that shook the local community which has barely had time to heal and reflect as the war rages on.

A 1940s locomotive sits in front of the station, around which the rest of the industrial city was built starting in the 19th century.

On the morning of April 8, an estimated 4,000 civilians gathered to board evacuation trains as Russian forces advanced.

At 10:30 am (0830 GMT), the station was struck by a Tochka-U missile, which according to experts was armed with cluster munitions.

Sixty-one people were killed and more than 160 injured, the mayor's office has said.

The bombing is one several alleged war crimes blamed on Russia since the start of the war, along with the killing of civilians in Bucha near Kyiv, and the battle for Mariupol.

Those areas, like Kramatorsk, have had little respite from the conflict's brutality.

To the right of Kramatorsk station's main platform, where the majority of the victims died, there are still some traces of damage from the explosion.

A small garland with soft toys lies next to the station railings in silent tribute to the at least seven child victims.

A discreet granite slab states simply: 'There will be a memorial to the victims of April 8, 2022 here.'

Arriving at the station shortly after the strike that day, an AFP team saw at least 30 bodies in bags, and pavements covered in blood.

Abandoned suitcases, children's possessions and food were strewn around.

To this day, stallholders and taxi drivers around the station make only general comments about what happened, shutting down at any mention of the attack.

'It's not good to remember,' said Alexander, a station greengrocer for 20 years.

Kramatorsk station re-opened in October, six months after the strike, retaining its stationmaster, a small energetic woman with short brown hair, who was on duty that morning.

She has declined to speak to reporters.

'What do you want me to say? Bodies torn apart, blood, screaming. It was horrible, horrible!' she shouted at AFP correspondents in July.

She has declined to give interviews before or since.

'It's painful,' said Byba, speaking to AFP at the local firehouse.

'That morning, I had arrived early with two of my men to organise the evacuations. Then I went back to the fire station,' he said.

Firefighters, police, volunteers and city employees had been helping civilians flee west, following a call to evacuate from Ukraine's authorities.

The mayor's office said some 80,000 people were evacuated from Kramatorsk between the start of Russia's invasion on February 24, 2022 and the day of the strike.

'I remember the first explosion. Very loud. And then a second one, more muted,' Byba said.

He and his men rushed to the station.

'When we arrived, we immediately realised the scale of the tragedy. There were horrific scenes. But the thing I remember most was the terrible smell of blood, very strong. Very, very strong.'

The firefighters tried to extinguish blazing cars and treat the wounded.

'They were dying in our arms,' Byba said.

Anton Malinsky, a council worker, said the crowds present at the station had come from across the region.

'I was a few metres from the station. The explosion was so powerful that some people started bleeding from their noses,' he said.

Then he was thrown to the ground and trampled by the panicked crowd.

'I am a former police officer and I know how to stop myself getting hurt. I don't think about it,' he said.

A cosy cafe near the station decorated with images of the Eiffel Tower re-opened a few weeks ago.

There, humanitarian volunteer Natalya Slobodyan said life is slowly resuming in the city following a successful Ukrainian counter-offensive in the autumn.

'People are coming back. Life is resuming. The mood is improving,' said the mother-of-three, 36.

Following the start of the Russian invasion, Slobodyan threw herself into volunteer work to avoid depression.

On April 8, she was supposed to pick up medicine at the station.

'Sometimes life gives you signs. The children were crying and the car wouldn't start... So when there was the explosion -- a sound that will forever ring in my ears -- I was still at home,' she said.

She still went to the station after the blast.

'The first thing I saw was a dead child. Then chaos everywhere,' she said.

One of her best friends was killed that day, she recalled, describing the re-opening of the station as 'strange'.

Following the station bombing, Ukrainian and international figures vowed to pursue the perpetrators of the 'war crime'.

The Ukrainian prosecutor's office, which leads the investigation, and which at the time said it had evidence of Russian responsibility, declined to comment to AFP.

In October 2022, digital investigators from the Centre for Information Resilience (CIR), a non-governmental organisation, said its evidence pointed to 'Russia being the likely perpetrator'.

'We began our investigation on the day of the tragedy,' said Pierre Vaux, one of the authors.

Investigators were helped by masses of videos and social media messages published on the eve of and day of the strike.

Among the messages was a warning from pro-Russian separatists on April 7 against train evacuations.

On April 8 Russia's defence ministry warned about possible strikes on stations in the region where it said Ukrainian troops were arriving.

Russia has denied responsibility, claiming it does not have the type of Tochka-U missile used, calling it a 'provocation' by Ukraine.

AFP correspondents saw the Russian words 'For the children' -- an expression used by pro-Moscow separatists -- written on a missile fragment.

No official list of all the victims has been published and most of the affected families have left the region or have refused to speak.

Among the dead were 'a teacher, a librarian, adolescents and children with their mothers' said Oleksiy Ladyka, a journalist with the Kramatorsk Post newspaper.

Ladyka has identified many of the victims and opened an online memorial.

'Local authorities did not have the names. The military didn't tell us anything. We looked ourselves, going through social media, activating our sources.

'It was even more complicated because the victims came from different places in the region.'

His memorial has 26 names, photos and a few lines describing each victim's life.

'We will work on the past after the war,' said Andrei Bessonny, the deputy mayor of Kramatorsk.

'I was there on April 8. I saw. Several days after the explosion, we were still finding human remains in different parts of the station.

'It is the worst disaster this city has seen given the number of victims.

'But it is continuing, it is not over. It's every day... The Russians have already destroyed half the country.

'Maybe we are used to it, maybe we have become desensitised.'