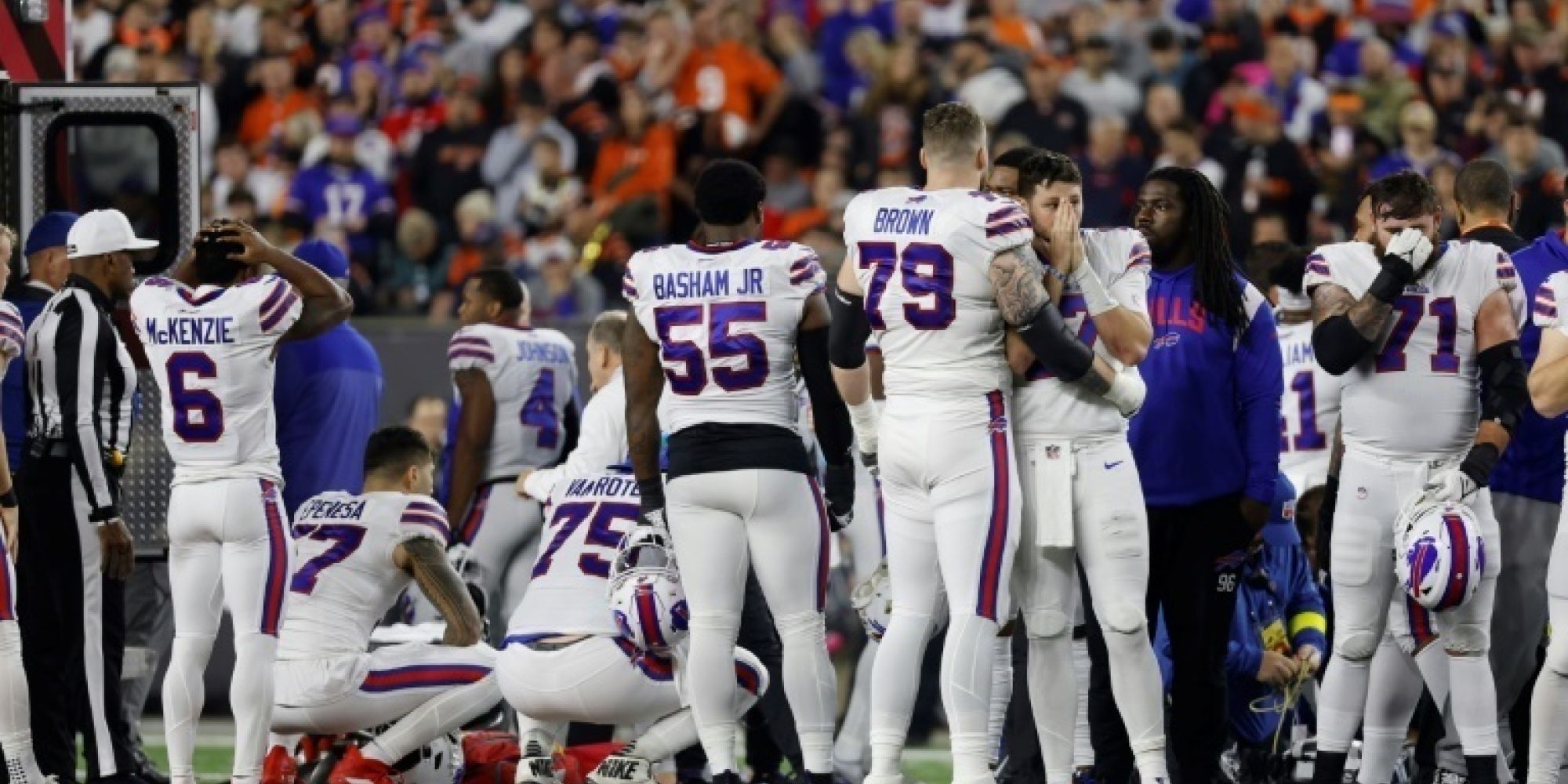 Buffalo Bills safety Damar Hamlin, who suffered a cardiac arrest during an NFL game, remained hospitalized in critical condition Tuesday while the league said the suspended contest would not resume this week.

The 24-year-old defensive back collapsed Monday night after receiving a hard hit in the chest while tackling receiver Tee Higgins during the first quarter of the Bills' game at Cincinnati.

Medical workers restored Hamlin's heartbeat on the field while working for 30 minutes as players from both teams wept and worried, the horrific scene viewed by a national television audience and a stadium crowd stunned into silence.

Hamlin was taken from the stadium in an ambulance and the pivotal contest between playoff-bound NFL clubs, led 7-3 by Cincinnati, was halted.

'Damar Hamlin spent last night in the intensive care unit and remains there today in critical condition at the University of Cincinnati Medical Center,' the Bills said in a statement.

'We are grateful and thankful for the outpouring of support we have received thus far.'

The NFL announced the Bills-Bengals game would not be completed this week, with no guarantee it would be finished, and said next weekend's final regular-season games remain as scheduled.

'The NFL has made no decision regarding the possible resumption of the game at a later date,' an NFL statement said. 'The league has not made any changes to the week 18 regular-season schedule.'

That means the NFL expects the Bills (12-3) to play host to New England (8-8) on Sunday in a game with playoff qualifying and seeding implications.

Dorrian Glenn, identified by several US media outlets as Hamlin's uncle, said his nephew had to be resuscitated twice, once on the field and again after arriving at the hospital.

'It's just heartbreaking seeing him like that,' Glenn said. 'We were all in tears. I never cried so hard in my life just to know that my nephew basically died on the field and they brought him back to life... It really was a gut punch.'

The NFL Players Association tweeted mental health and counseling information to all players in America's most violent and most popular sport.

'We continue to be in touch with the clubs and NFL to ensure that Bills and Bengals players have every resource available to aid and support them during this time,' an NFLPA statement said.

'The President has seen the horrific news. We hope his condition and his health improves quickly,' White House spokeswoman Karine Jean-Pierre said.

Seven-time Super Bowl champion Tom Brady, the 45-year-old quarterback who ended a brief retirement to play this season, tweeted: 'Moments like this put into perspective what it means to play this game we love.'

'I was shook up,' 39-year-old Green Bay quarterback Aaron Rodgers said on the Pat McAfee Show. 'Your football mortality comes right face to face. One of your brothers in the fraternity of the NFL is fighting for his life right now.

'Whether you are currently playing or done playing, you're shook about this because you just never thought you would see something like this on the field.'

A GoFundMe page supporting Hamlin's foundation, which sought $2,500 for youth charity programs, has more than $5.3 million in contributions, with family members saying the money will also go to 'Damar's current battle.'

'We want to express our sincere gratitude for the love and support shown to Damar during this challenging time,' Hamlin's family said in a statement.

'We are deeply moved by the prayers, kind words and donations from fans around the country... Your generosity and compassion mean the world to us.'

Other sports teams supported Hamlin, with NFL clubs tagging social media with 'Pray for Damar' messages. The NHL Buffalo Sabres wore 'Love for 3' shirts noting Hamin's jersey number into the arena at Washington, where a moment of silence and round of applause were tributes for Hamlin.