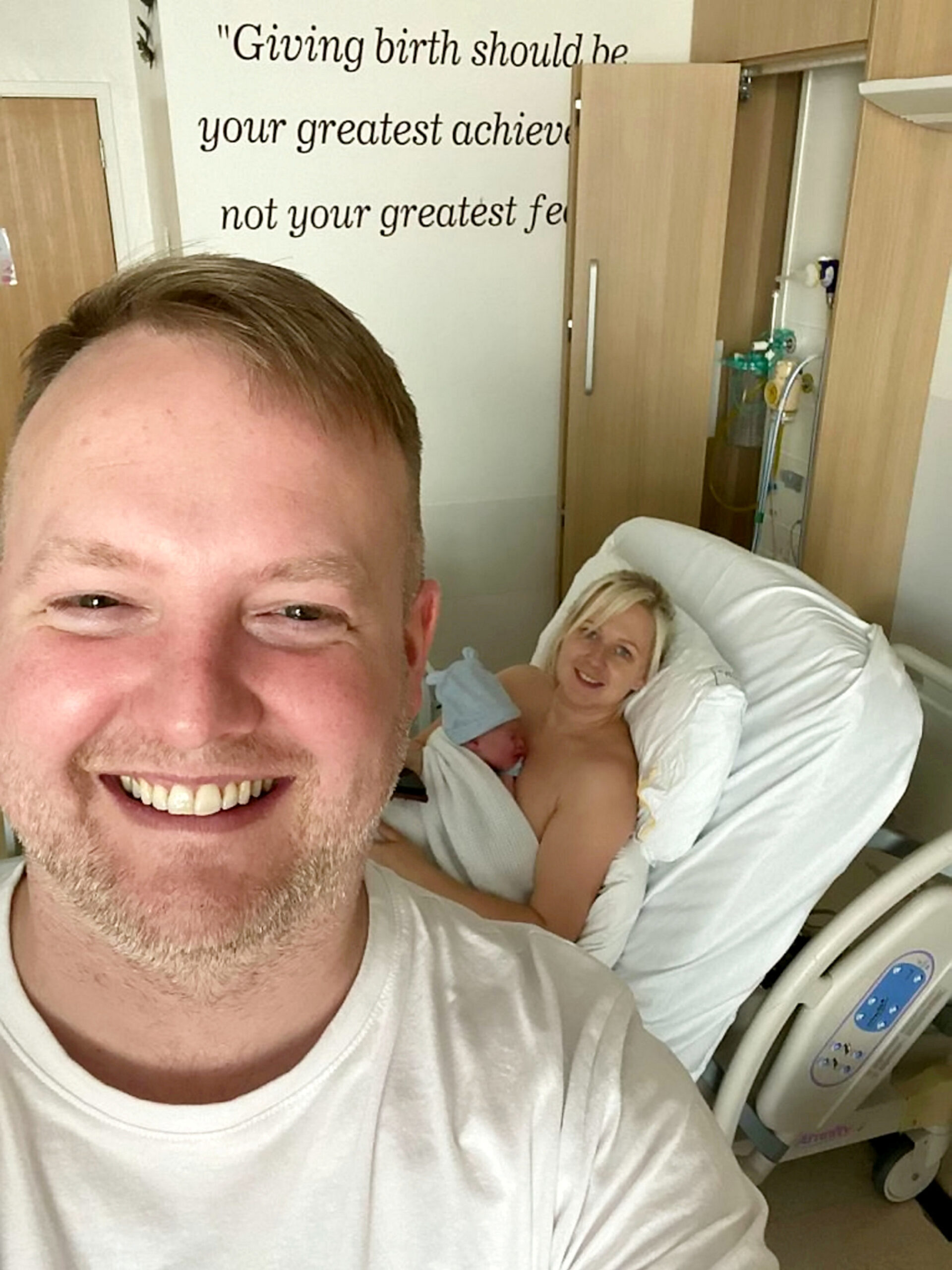 A stunned dad has told how his partner gave birth in the footwell of his car as he was doing 70 miles an hour in the fast lane.

Lee Reynolds, 34, thought he had “plenty of time” when Natalie Whitton, 31, went into labor in the early hours of Wednesday, July 27, with their second child.

But as the pair were blasting along the M65 highway, near Burnley, in the north of England, in the United Kingdom, he watched in shock as his new baby, Harrison, “shot out” into the footwell of his Ford Fiesta station wagon.

Reynolds, who was on the phone to a midwife throughout most of the journey, said he remembered thinking, “Oh, sh*t! We ain’t going to make it,” just moments earlier.

And following the sudden arrival of his 7-pound, 11-ounce baby, he peeled off onto the hard shoulder to wait for an ambulance crew.

But as the minutes ticked by with no sign of a medic, the concerned dad decided to make a dash for the nearest hospital, where Natalie got immediate assistance.

Transport manager Reynolds said: “We were in the fast lane going 70 m.p.h., and I just looked on the floor and went “There’s a baby in the footwell!” to my partner.

“She quickly picked up the baby, and then the midwife on the phone was telling us what to do. 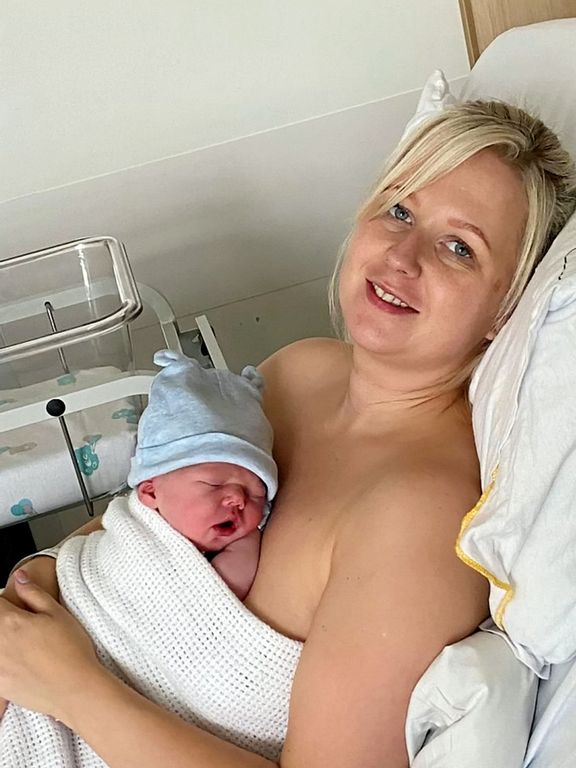 Natalie Whitton & baby Harrison Reynolds. An elated couple have had a birthing experience like no other – with mom giving birth to their son on the M65. Undated photograph. (Lee Reynolds, SWNS/Zenger)

Whitton added: “Lee kept asking me if I wanted to pull over. I could feel a little bit of an urge to push, but I said: ‘keep going!’

“Then all of a sudden, the baby came out, and it went into the footwell of the car on the floor.

“I remember feeling relieved that this pressure had gone. I had a water birth before, and that helped a lot, but I had nothing this time.”

Reynolds, who lives with kitchen worker Whitton in Darwen, in the U.K., said his partner had begun experiencing contractions around 3:30 a.m. on Wednesday morning, July 27.

But the pair didn’t rush to Burnley Hospital, as they’d been previously been turned away before the birth of their first daughter, Sienna, now 4, for arriving too early.

He said: “Natalie rang Burnley Hospital at about 3:30 in the morning to speak to the midwife, but when she stood up, her water had gone.

“She had these pains but said ‘I’ll hold off for a bit’, just thinking there’s no point going all the way to Burnley just to get turned away again.”

Reynolds said they’d spent the next few hours organizing childcare for their daughter, before setting off in their car for the 30-minute journey around 5:30 a.m.

But as they sped along the highway, he began frantically calling nearby birthing units and the emergency services, worried they had left things too late.

“I ended up dialing Blackburn Birth Center, which is closer to Burnley than us. 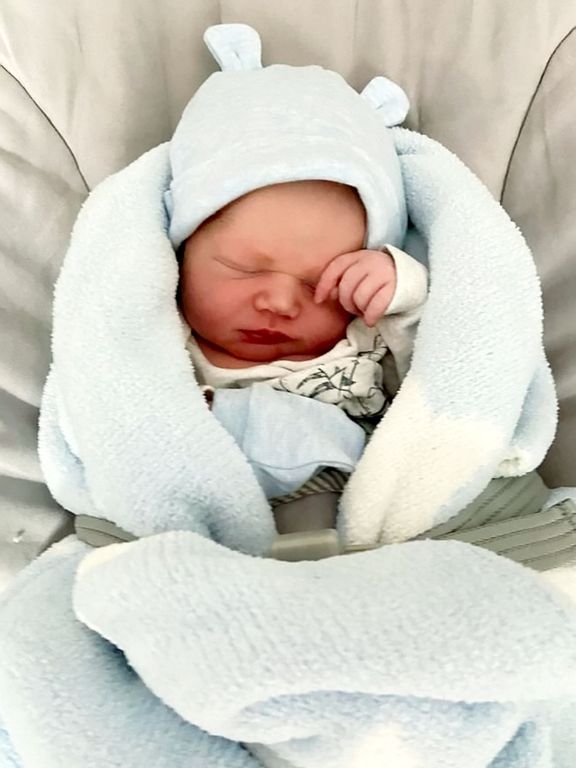 Harrison Reynolds. An elated couple have had a birthing experience like no other – with mum giving birth to their son on the M65. Undated photograph. (Lee Reynolds, SWNS/Zenger)

Reynolds later got a call back from the midwife to check on their progress when all of a sudden, his partner gave birth to their tiny baby boy.

He said: “I was talking to the midwife on the phone, and then the baby shot out, literally shot out, into the footwell.

“So the midwife said to me, ‘Pull over on the hard shoulder and ring 999 [the U.K. Emergency services].’ So that’s when I pulled over.”

Reynolds helped his partner perform some basic health checks on their new child – who was born at 5:57 a.m. – under the guidance of 999 emergency call handlers.

But after waiting some time for an ambulance, Reynolds decided to take matters into his own hands and drive to Burnley Hospital with his partner and their newborn child.

He said: “I could actually see the sign on junction 12 of the M65 for Burnley hospital – and that’s the junction I needed. I was ten minutes away.

“So I ended speaking to the midwife, saying “Am I better just going? What do you advise?” And she said, “If you think you’ll be alright, and you’ll be quicker, just go for it.”

“We went straight into the hospital, into the emergency out-of-hours unit, and two midwives and a healthcare assistant came running out to Natalie to help her.”