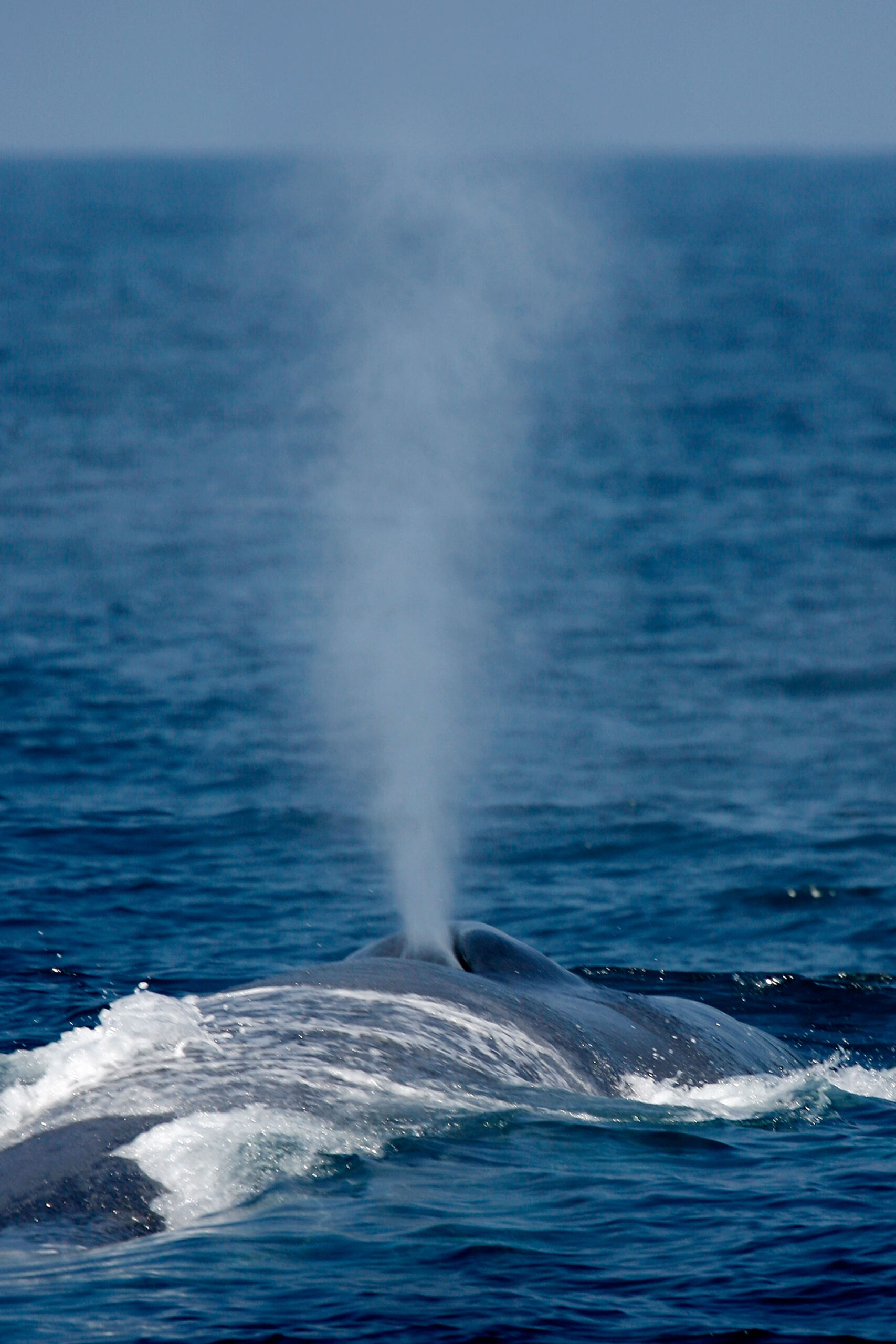 The distinctive songs of rare pygmy blue whales have been picked up by underwater nuclear bomb detectors.

Haunting sounds show numbers of the elusive species have rebounded – after it was hunted to near-extinction.

Warming oceans could deplete their food supply of tiny shrimp-like krill but underwater microphones in the Indian Ocean may hold the key to saving them.

The network of listening devices was originally set up to monitor for unapproved nuclear testing.

Blue whales sing at a frequency below that of human hearing. The Australian team sped up almost two decades of acoustic recordings to make them audible.

The new population has been named Chagos after the archipelago they surround; there may be as few as 5,000 left in the world.

Lead author Lyra Huang, of the University of New South Wales (UNSW), Sydney, in Australia, said: “We used up to 18 years of acoustic recordings of the Chagos whales from the data we got from the UN organization, CTBTO.”

Comprehensive Nuclear-Test-Ban Treaty has been signed by 186 countries, including the U.K., Russia, and France. Among those that have not signed are the U.S., Israel, China, India, Egypt, North Korea, and Pakistan. Because the treaty is not yet in force, the Preparatory Commission for the Comprehensive Nuclear-Test-Ban Treaty Organization (CTBTO) was founded in 1996, has a staff from over 70 countries.

Based in Vienna, it is headed by Robert Floyd of Australia.

CTBTO installed the devices in 2002 and has been using hydrophones since 2002. 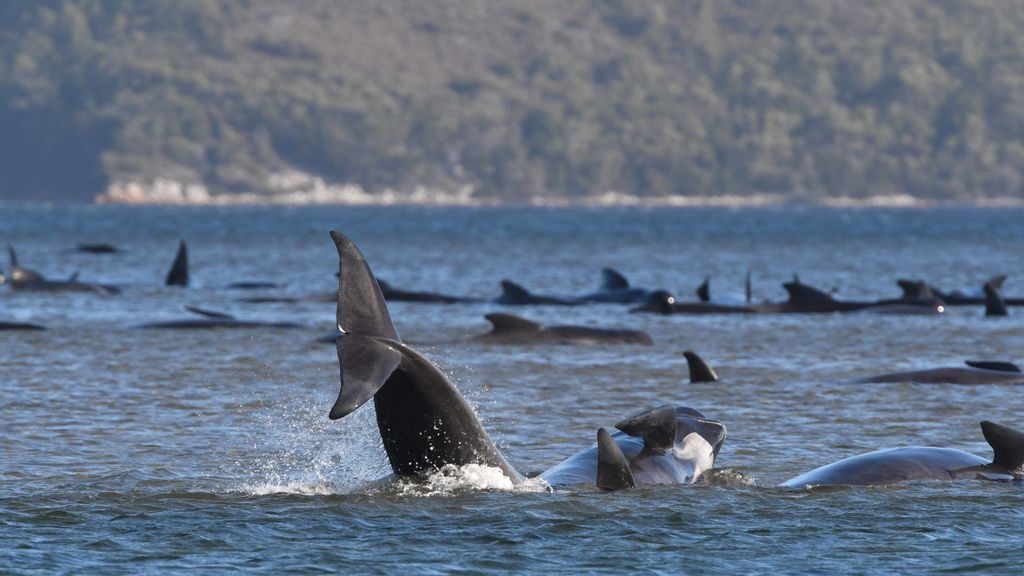 Hundreds of pilot whales are seen stranded on a sand bar on September 21, 2020 in Strahan, Australia. (Photo by The Advocate – Pool/Getty Images)

Huang, a marine sciences honors student, went on: “And we discovered different seasonal patterns of the whales on the west and east side of the island.

“We found that first of all, the amount of whale songs is increasing over the study period at both sites.

“Secondly, they are mainly on the south-eastern side from September to November, and they then migrate to the north-western side and stay until February.

“Our analysis shows these movements are related to environmental factors such as sea surface temperature and food availability.”

Despite their size, actual sightings are extremely rare. But for the recordings, the herd would still be unknown to us.

Blue whales in the Southern Hemisphere are difficult to study because they live offshore and don’t jump around like humpbacks – the ‘show ponies of the sea.’

Song frequency recorded by the two sets of hydrophones placed at the northwest and southeast of Diego Garcia identified patterns of behavior and migration. The atoll is governed by the U.K. and has a joint military base in cooperation with the United States.

They correlated with differing levels of food abundance and sea temperature of each area, some 125 miles apart.

Thousands of songs are produced every year. It is not known how many whales are down there – but it is a lot, say the scientists.

While welcome news to conservationists, there are potential knock-on effects on their main food source, krill.

Specifically, more chlorophyll-a in the southeast side of the island was linked to increased whale presence, as well as lower sea-surface temperatures in the time that they appear to favor this area.

Co-author Tracey Rogers, also from UNSW, said lots of chlorophyll-a suggests more food at those times for the whales.

High concentrations show there is an abundance of phytoplankton. And since krill feed on phytoplankton, it makes it an attractive feeding site for whales.

Professor Rogers explained: “We see high concentrations of chlorohpyll-a on the south-eastern side of the island which corresponds with times when there are more whale songs recorded there, but no correlation at the north-western side.

“This tells us that the whales are most likely feeding on that south-eastern side and then migrating past the western side of the island.

“Our earlier research picked up these same whale songs up as far as Sri Lanka and across as far as the Western Australian coastline.

“This means these whales migrate across the Indian Ocean, which is really unusual for blue whales as they generally move north and south to and from Antarctica, but these guys are going east to west, and back again.”

The changes in the sea temperature at both sites is also significant. More research is needed to understand what effect warming oceans could have on the whales.

Rogers said: “That area of the world, the middle of the Indian Ocean, is seeing some really strong changes in water temperature.

“So, it would be really interesting to see how this newly discovered population is going to fare into the future – is that going to be better for them or will it be not as good? But at the moment, things seem to be going really well for them.” 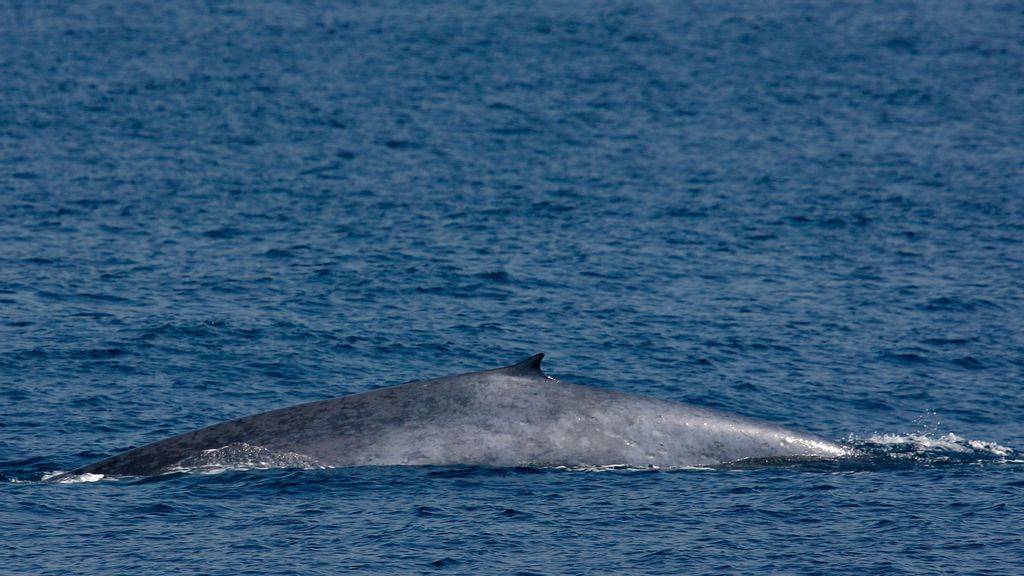 A rare and endangered blue whale, one of at least four feeding 11 miles off Long Beach Harbor in the Catalina Channel, rises to the surface July 16, 2008 near Long Beach, California.(Photo by David McNew/Getty Images)

Pygmy blue whales sing in a different ‘language’ to other blue whales and the species don’t interbreed.

The CTBTO will be an invaluable resource when evaluating the health of the Chagos blue whale populations going forward.

Rogers added: “Oceanic conditions in the Indian Ocean are predicted to change under future climate scenarios.

“As the CTBT Organization continues to monitor our oceans, listening for unapproved nuclear tests, they continue to collect data that scientists need to understand how warming of the central Indian Ocean waters impacts the Chagos whales and other marine wildlife in the area.”

The study is in the journal Frontiers in Marine Science.