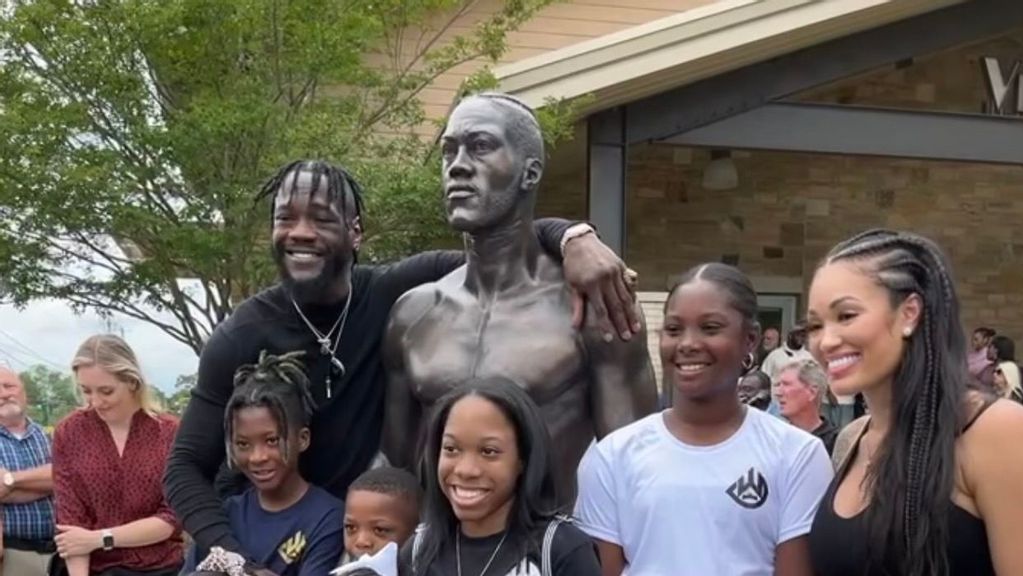 Deontay Wilder is known as “The Bronze Bomber” for winning a bronze medal in 2008 Olympics.

And now he’s been immortalized in bronze.

Last month, Wilder was honored as a black man with a 7-foot tall statue “right down the street from where they used to sell slaves,” he says.

A former heavyweight champion born and raised in Tuscaloosa, Ala., Wilder unveiled his bronze statue on May 25 during a confetti-festooned ceremony before hundreds of fans outside the Tuscaloosa Tourism and Sports building.

The 6-foot-7 Wilder kissed the 7-foot, 830-pound statue resembling the hammer-fisted fighter with its chiseled upper torso and sinewy arms.

“God has truly blessed me. It’s amazing and the perfect timing for me to be immortalized with a bronze statue that looks just like me,” said Wilder. “I’m a black man living in the heart of Dixie, and my likeness is positioned in a place right down the street from where they used to sell slaves back in the day.” 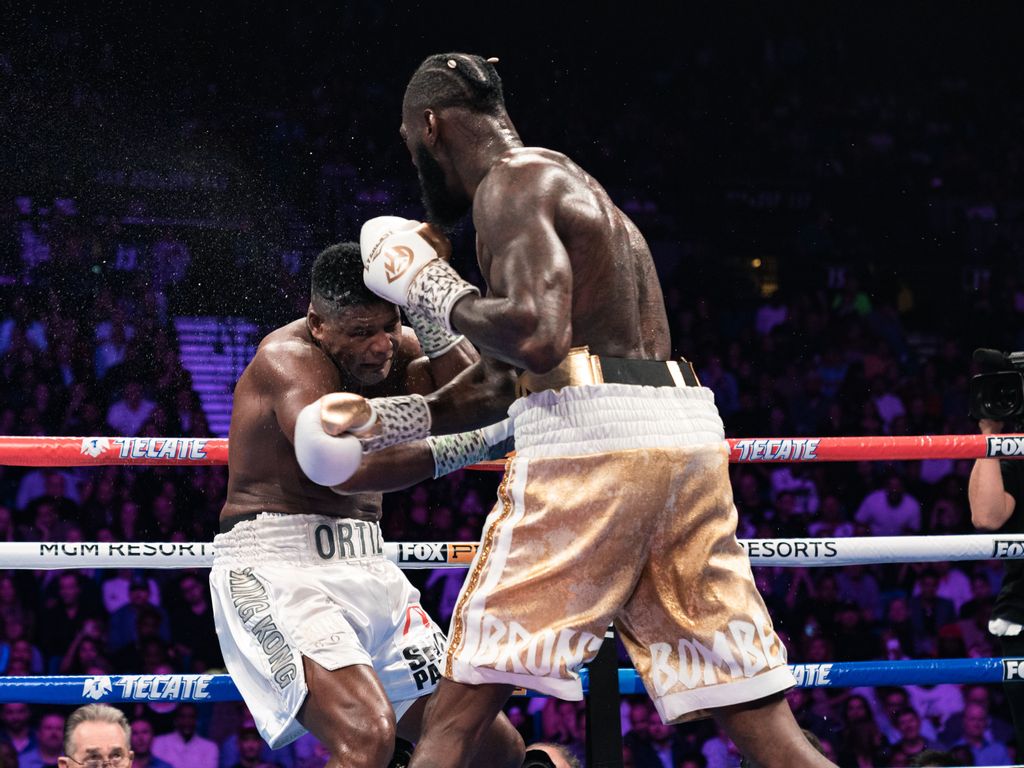 The symbolism is not lost on Wilder, whose honor came a year to the day from the Memorial Day murder of George Floyd. Floyd was suffocated to death on May 25, 2020, by white Minneapolis police officer Derek Chauvin, who in June 2021 was convicted of murder for kneeling on the Houston native’s neck for nearly 10 minutes.

Wilder was lionized nearly two years after the removal on June 2, 2020, of the 115-year-old Confederate Soldiers and Sailors Monument from Linn Park. Birmingham Mayor Randall Woodfin did so following a week of post-Floyd unrest among citizens of the majority-black city located an hour from Tuscaloosa.

“There are some of the confederate statues being taken down nearby, but there are still certain areas where historical memorials still are standing as representations of racism from the times of slavery and segregation,” said Wilder, a 36-year-old father of five girls and three boys between the ages of 4 and 17.

“For all the sacrifices I’ve made and the time I’ve put into my career and into the community, what a miracle for a black man who is still alive, young, handsome, wealthy and happy to be recognized in public by the local citizens. …  I’m continuing to make history.” 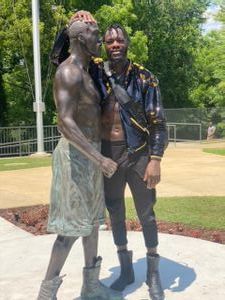 “The Bronze Bomber” with the statue of him. (Courtesy of Deontay Wilder)

“The Bronze Bomber’s” career is one of overcoming injuries given his relatively late start in the sport as well as being mostly out-weighed and undersized.

Wilder had recorded seven straight knockouts before going 0-2-1 in his past three fights with the 6-foot-9 Tyson Fury, twice being knocked out and dethroned as WBC champion.

Fury was twice floored by Wilder during their draw in December 2018 before winning by seventh- and 11th-round stoppages in February 2020 and October 2021.

A comeback is not out of the question for Wilder if it means a fourth bout with Fury or challenging undefeated two-division title winner Oleksandr Usyk, who dominated and dethroned IBF/WBA/WBO champion Anthony Joshua in September.

“I’m considering the resumption of my career if any man out there has the courage to fight me. On the other hand, I’ve worked hard to have the lifestyle I have and the free time to spend with my family,” Wilder said.

“I had a vision from early in my career and was able to establish a foundation, doing the right things to be in the position that I’m in. I’ve got the love of my family and the love of the people in my community.”

Wilder claims to have been “prophesied” to dethrone Bermane Stiverne as WBC champion by unanimous decision on January 17, 2015, at the MGM Grand Garden Arena, doing so on the 73rd birthday of the late Muhammad Ali and two days after that of Martin Luther King’s on January 15. 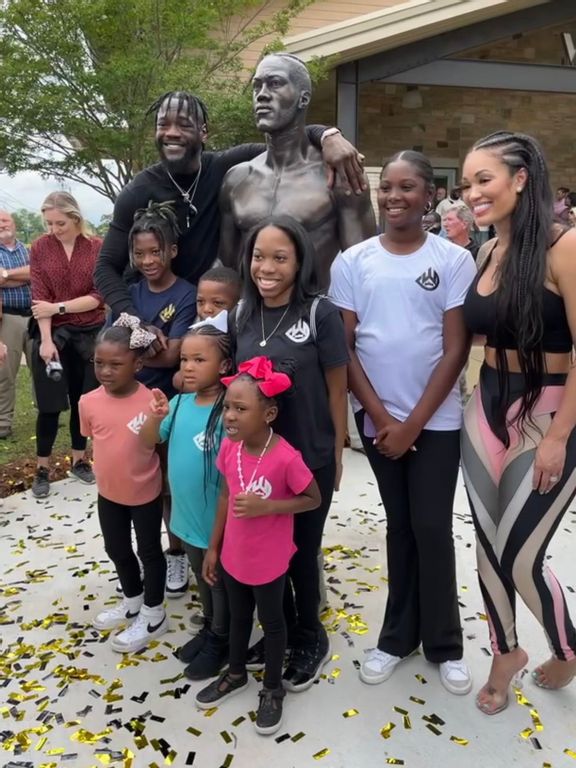 A fuller view of former heavyweight champion Deontay Wilder (far left) with his family on May 25 for the unveiling of his 7-foot, 830-pound replica statue on the campus of the Tuscaloosa Tourism and Sports building. (Courtesy of Deontay Wilder)

Wilder became America’s first heavyweight titleholder since Shannon Briggs in 2007, fulfilling a vow made to his daughter, Naieya, who was born on March 20, 2005 with the congenital disorder, spina bifida, and told she might never walk.

Wilder said his grandmother, Evelyn Loggins, a minister, repeatedly told him as a child he was “special, anointed and ordained” before her death in 2010 at the age of 76.

A 19-year-old Wilder dropped out of Shelton State Community College to support Naieya, taking one job driving a truck and another at a restaurant. Wilder turned to boxing at a friend’s urging and won an Olympic bronze medal in 2008.

In October 2012, Wilder spent his 27th birthday as the primary sparring partner for Wladimir Klitschko before the then-unified heavyweight champion’s unanimous decision win over Mariusz Wach that November.

Wilder had been invited to Klitschko’s camp by trainer Emanuel Steward, who named Wilder as Klitschko’s successor, calling him “The No. 1 best American prospect for winning the heavyweight title.”

“I became the world champion just like Emanuel Steward said,” Wilder said. “I am anointed like my grandmother said.”

Wilder is the second-most popular sports figure in his hometown behind the 18-time national champion University of Alabama football team, having fought nine times in his home state, with four of those battles being sold-out title defenses.

Wilder financially supports the Skyy South recreation and boxing facility, which is free for kids in Coffeeville, Ala..

“Joe Louis, Evander Holyfield, Earnie Shavers, Frankie Randall and Tracy Harris Patterson were all Alabama-born fighters, but Deontay is really the first fighter born locally and to accomplish everything while staying home.”

Wilder was at the White House in May 2018 when then-President Donald Trump posthumously pardoned Jack Johnson, America’s first black heavyweight champion. The pardon came nearly 100 years after Johnson was convicted of violating the Mann Act in 1913 for transporting a white woman across state lines “for immoral purposes.”

Johnson endured racial epithets and death threats while dominating white opponents and living an opulent lifestyle outside the ring. Johnson served nearly a year in and was 68 when he died in a car crash in North Carolina in 1946.

“Jack Johnson certainly had it a lot worse than I, but as a black athlete like Johnson, I want to inspire as a positive role model and motivator,” said Wilder. “It’s my mission to be a hero to my people. That was the mission of people like Muhammad Ali and some of our greatest black innovators and inventors.”

Wilder has had several injuries to his arms and fists throughout his career dating back to a 90-second TKO of Travis Allen in his seventh professional fight in August 2009, yet has knocked down or stopped every man he has faced as a professional. 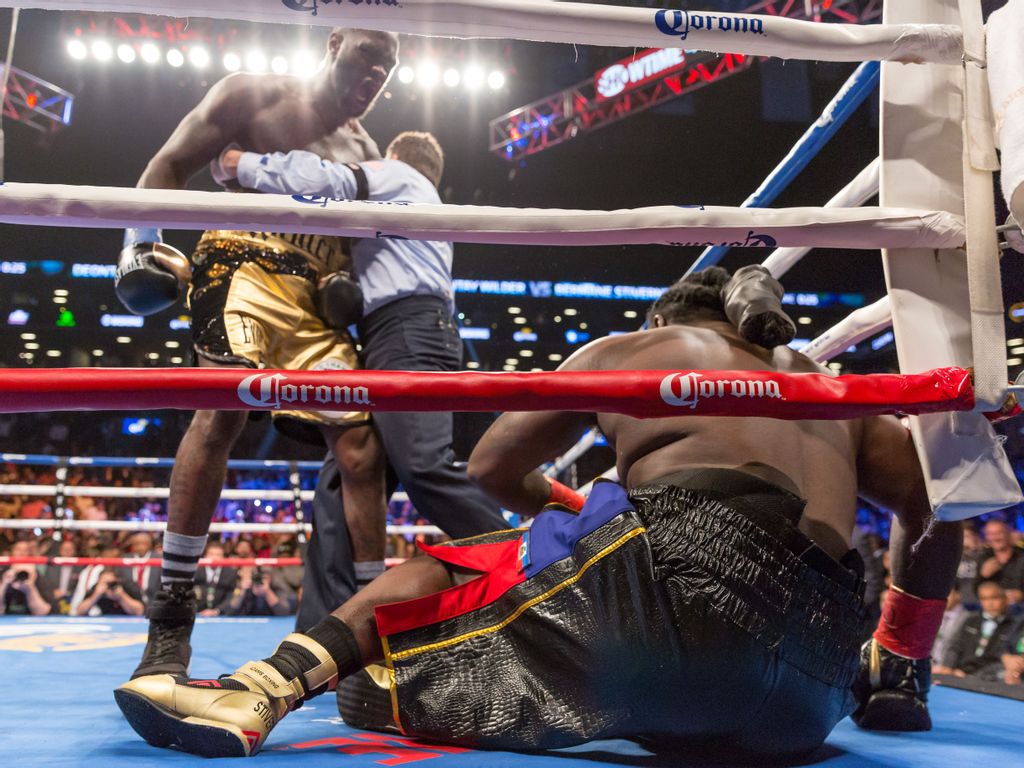 “The Bronze Bomber” required surgery and therapy after suffering a torn left biceps during his initial loss to Fury and underwent a 90-minute surgery nine days after the fight to repair the hand’s metacarpal bone after breaking it in the fourth round even as he twice dropped Fury in that round.

“I’ve always said that my No. 1 goal was to be the undisputed heavyweight champion of the world, but if I return to boxing, it has to be really worth my while, and it’ll be because I want to and not because I have to,” Wilder said.

“Over 90 percent of retired fighters don’t have their faculties or anything to show for their careers after the game is over, but I’ve invested wisely, so I’m blessed to be able to say that I don’t have to ever get into the ring again for the rest of my life. I’ll return to the ring if the money is right.”

Edited by Richard Pretorius and Matthew B. Hall