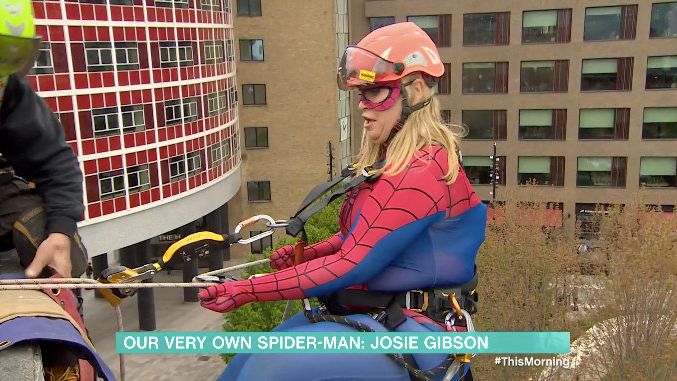 The presenter was hosting a segment about the new 20th anniversary Spider-Man featurette.

As Holly Willoughby and Phillip Schofield cheered her on from inside the studio, Josie screamed: “My spider senses are telling me maybe this is a bad idea!

“If you like action movies then you wanna tune in to this because this is the real action here.”

As she lowered herself down from the roof of the famous White City building which houses This Morning’s studio, strapped into an abseiling harness, she shouted: “Celebrating 20 years of Spider-Man films, and don’t we just love it.

“I don’t know how to get out of the harness but I’m so glad I did that.”

The presenter revealed earlier on in the show she had undergone hypnotherapy to help her with her fear of heights.

Before starting her descent, she said: “I’m quite scared of heights.”

“It is a lot higher than I thought it would be, you just look down there and everybody looks like ants.

“But I’m gonna try to channel my inner Spider-Woman and get down that wall.” 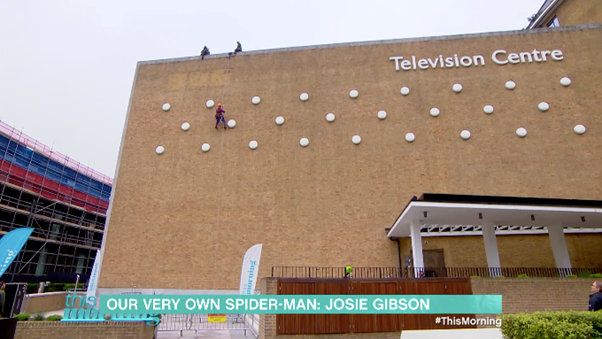 As Josie reached the ground, Phillip joked a taxi was coming to pick her up to take her to the Shard.

Josie swung into action to celebrate Spider-Man’s 20 years on the big screen.

To mark the anniversary, Sony Pictures has released a 30-minute long featurette Spider-Man: All Roads Lead To No Way Home, a new documentary [https://youtu.be/Sn68AF2MGo8] with never-before-seen interviews with the three Spider-Men.

Presented by Spider-Man stars J.B Smoove and Martin Starr, it showcases the journey of Spider-Man swinging from his first cinema appearance to his latest in the Marvel Universe and is available to rent from 9 May, at most UK online retailers including Apple TV, Amazon Prime Video and Google Play.

Since the initial conception of the comic book hero by Stan Lee and artist Steve Ditko in Amazing Fantasy #15 in 1962, there has been eight films, cartoons, and merchandise. 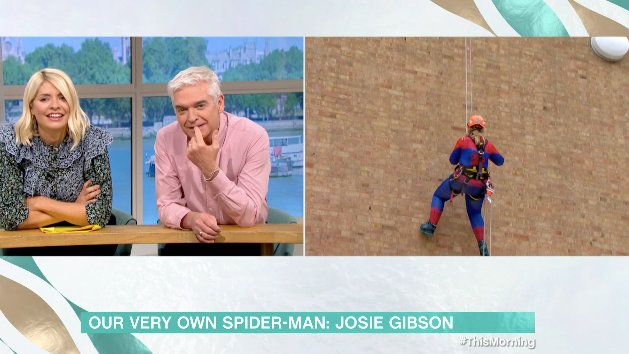 The three generations of Spider-Man, stars Tom Holland, Tobey Maguire, and Andrew Garfield, have discussed what it truly takes to become the superhero, with new revelations about how the famous costume has changed over the years and the problems each actor faced when suiting up.

In one clip, Andrew Garfield and Tobey Maguire reveal the staggering amount of talcum powder they used to fit into their suits, while Tom reveals his tricks of the trade about how he put on the iconic costume.

Please credit: This Morning airs weekdays from 10am on ITV and ITV Hub.